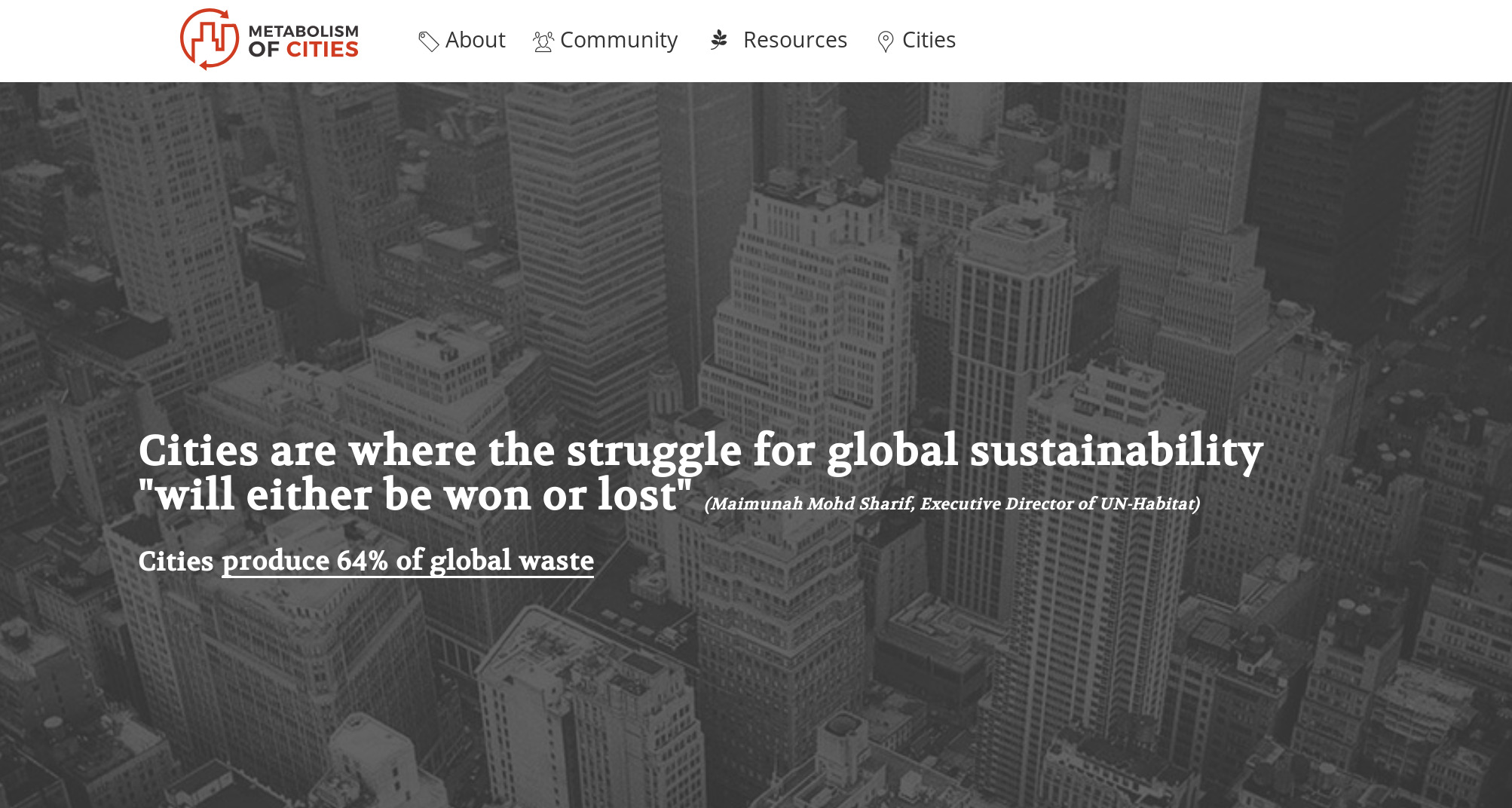 After more than one year of brainstorming, planning, writing, and programming, Metabolism of Cities has launched its new website! The website was completely rewritten - both in content and in terms of code - and it contains a wide variety of new features, tools, and sections. Below follows an overview of the main changes:

One of the key drivers of our redesign was the development of the MultipliCity platform. This is a data platform for urban metabolism that provides dashboards, visualizations, datasets, maps, and other information for cities throughout the world. This information can be uploaded by researchers as well as the general public, allowing for the crowdsourcing of urban metabolism data. Learn more here.

It was time for a new look and feel. Metabolism of Cities contains a wealth of information but it was getting more and more difficult to grasp what information was available in the old structure. The new layout makes it easier to more quickly see what is there, while at the same time providing a more professional look and feel. There is a new logo too!

Previously, the website was written in PHP and used a MySQL database. The new website is written in Python, using the Django platform, and driven by a PostgreSQL database. This meant that all code had to be rewritten. This new structure should make it easier for collaborators to write code for our open source platform, and it is better equipped to scale. Finally, the website was set up in such a way that spin-offs can be developed relatively easily (see for example the work done on the Metabolism of Islands). All code is open source and available through Gitlab.

Publications were the first key component to the website. However, the underlying structure has not been changed since the beginning. This means that this section was not modified to suit new, emerging requirements and expansions. This section now finally got a complete makeover! The most important change is the integration with other parts of the website. Publications can be linked to cities (in the MultipliCity platform), to materials and products, and to a new, hierarchical set of tags. This will allow for a lot of new ways to show related publications throughout the website.

Internally, Metabolism of Cities has been setting up a new structure to divide the workload by defining a number of task forces. Each task force has specific responsibilities, and will require specific skills. In order to encourage visitors to join the task forces, a list of pending tasks has been created for each task force, which gives a good impression of the type of work undertaken by each group. To guide the efforts, time was also spent debating and defining the mission and values of Metabolism of Cities.

The migration of all content is not yet complete. There are a number of sections that will require additional coding before their new versions can be embedded in the website. These include OMAT (the Online Material Flow Analysis Tool), GUMDB (the Global Urban Metabolism Database), and the stakeholder initiatives. All of these tools remain accessible through the archived website until the migration is complete.

There is always more work to be done! The new website is not yet completely finished, and there are already lots of plans for further improvement (see the various tasks within each task force). In the coming months, a key project will be the continued development and improvement of MultipliCity. Now that the first prototype cities are online, work will initiate to further enhance these cities (Cape Town and The Hague), while also working to launch the next wave of cities (including Beijing, Toronto, and Porto, among others). This work will involve not only programming, but most importantly it will involve data collection together with local universities, civic groups, city governments, and other interested parties. The system is set up so that anyone can contribute, and Metabolism of Cities will be available to help organise data collection events that enable kickstarting a city’s dashboard.

In addition to the focus on MultipliCity, work will be done to re-tag the publications in the library. The system itself was restructured, but the actual content still requires a thorough review. Finally, feedback from visitors is encouraged and will be taken into consideration while the team continues to improve and expand the website!

Join us in this journey!