A sociometabolic reading of the Anthropocene: Modes of subsistence, population size and human impact on Earth. 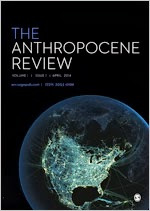 We search for a valid and quantifiable description of how and when humans acquire the ability to dominate major features of the Earth system. While common approaches seek to quantify the human impact upon the carbon cycle by identifying the area of land cleared by humans; we choose a more comprehensive path. Our point of departure is different human modes of subsistence, and we base our analysis on their social metabolism, in particular their energy metabolism. As a starting point, we use Ehrlich‘s classical IPAT formula, and give it a specific interpretation: human impact on Earth equals population size times affluence (interpreted as energy available per person) times technology - for each mode of subsistence. The overall impact (or rather human pressure) then equals the composite sum of these. We qualitatively describe the functional characteristics of hunter-gatherers, agrarian and industrial modes of subsistence such as population dynamics, energy regime and the technologies by which they interact with their environment. In a ‘toy' model, we translate these considerations into global numbers for the past millennia: we estimate the respective population sizes and affluence (energy), and finally technology concerning its impact on the carbon cycle. We find that it is reasonably possible to cross-check the size of pre-industrial agrarian populations from the size of urban populations; that it was in the last centuries BC when the size of agrarian populations exceeded those of hunter gatherers; that there seems to be a loglinear function of increasing average energetic metabolic rate from human basic metabolism across hunter gatherers and the agrarian mode to the industrial regime; and that from AD 1500 onwards, there is a very close relation between the urban population and fossil fuel use. We see a major historical dividing line around AD 1500: up to then, human population growth and metabolic rates carry about equal weight in increasing human pressure on the environment approximately fivefold from the year AD 1 onwards. From then on, fossil fuel use gradually raises the socially disposable energy to unprecedented levels and introduces a take off in population and technology. From then on, the overall pressure of humanity upon Earth increases by one order of magnitude; energy intensity contributes to this rise by roughly tripling the impact of population growth. Technology, because it is based upon a shift from biomass to fossil fuels (and other 'modern' energy carriers), does not moderate this impact, but enhances it by a factor of 1.5. Finally, we also draw critical conclusions concerning the applied IPAT model: apparently, there are strong interactions between the components of the equation: in particular, population dynamics depend upon energy in the agrarian, but paradoxically much less so in the industrial regime.