Lisbon's womb: an approach to the city metabolism in the turn to the twentieth century 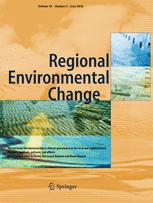 The consumption and production of food products in the municipality of Lisbon in the 1890-1900 decade is assessed with the support of historical cartography and statistical resources. For the first time, food production in a municipality in the turn to the twentieth century is accounted and simultaneously subject of a visual analysis of the land used for agriculture and of the water infrastructures that supported such uses. Agriculture occupied at least 40 % of the territory of the city, while the built environment occupied no more than 16 % of the territory. However, local production of food was far from supplying most of the citizens' needs, and substantial food imports were needed. In this context, the municipality behaved like a heterotrophic system, highly dependent on the external supply of resources. Moreover, comparing to other European cities at the time Lisbon was facing in the end of the nineteenth century a late and slow transition from an agrarian social metabolism to an industrial one, suggesting that Lisbon was still relatively high-solar-powered as compared to other European cities at the time that were already highly fossil-fuel-powered.